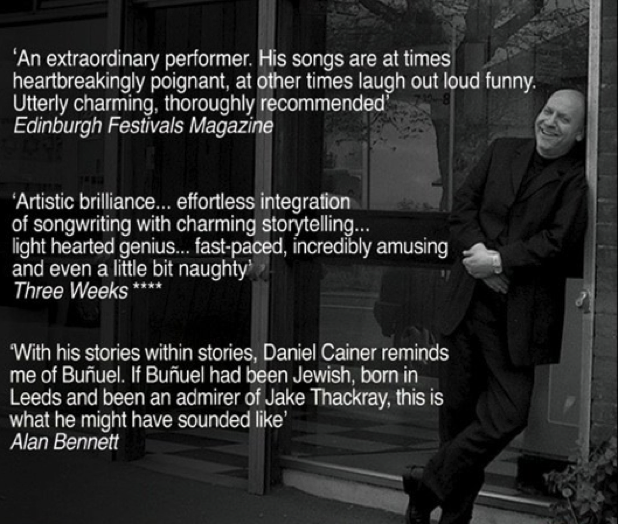 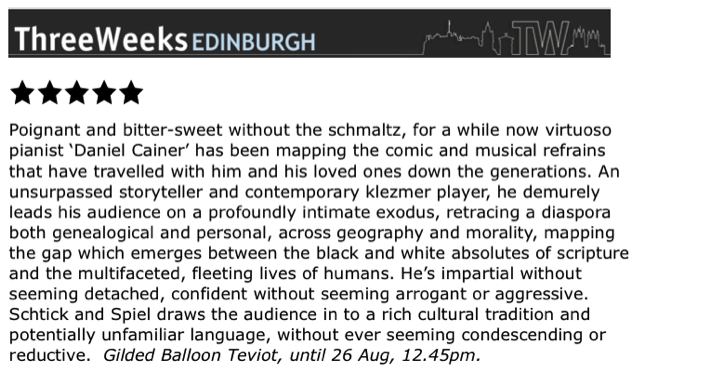 Daniel Cainer has brought a brand new show to the Fringe and there was a standing ovation at the end of this hour of witty, wise, moving and hilarious music,

Cainer has returned to a version of Judaism that he is still in a personal dialogue with. He taps into that challenge a lot in this show that names the issue that has defined Jewish identity for centuries: What does it mean to be Jewish? What is genius about Cainer’s approach is that he takes quite an intense look at this issue in a show that never feels too heavy. He uses plenty of  humour – spoken, shown visually, and sung, to explore what it means to be a Jew in the 21st Century. And it is as much about bagels as wailing walls. Powerful questions are asked with deceptive lightness and that creates an evening that is emotional, funny and, most of all, engrossing and entertaining.

The songs vary in pace and style andt I spied tears in the audience when Cainer sang about going to a cricket match with his grandfather. Cainer did a straw poll of the audience and a good half were non-Jews. The show makes many references to Jewish wiles and culture that had both the Jewish and the non-Jewish halves laughing as one. This is a show that creates community among its audience and also cleverly throws light on Jewishness in a light and articulate way. Throwing light on darker themes and using lightness to do that is a refined, rare skill. Few performers are able to consistently achieve that. Cainer is one who can.

On one level this is a fun musical cabaret hour. On another, we are taken on a journey through Cainer’s own story, his family tree, paralleled with the way Judaism itself has changed over the years, both as a religion and as a cultural identity. Yes, the enigma of Israel is dealt with directly and we are left, along with Cainer himself, frowning at that enigma, wondering where it will all end up in a dangerous world. But Cainer isn’t afraid to make it all personal singing us gentle tales of his own childhood encounters with anti-Semitism and the tapestry that makes up the family generations.

The serious stuff is all wrapped up in humour, delightful songs with clever and inventive lyrics. Cainer is a cheekie chappie with noodles of talent and charisma. Highly recommended.